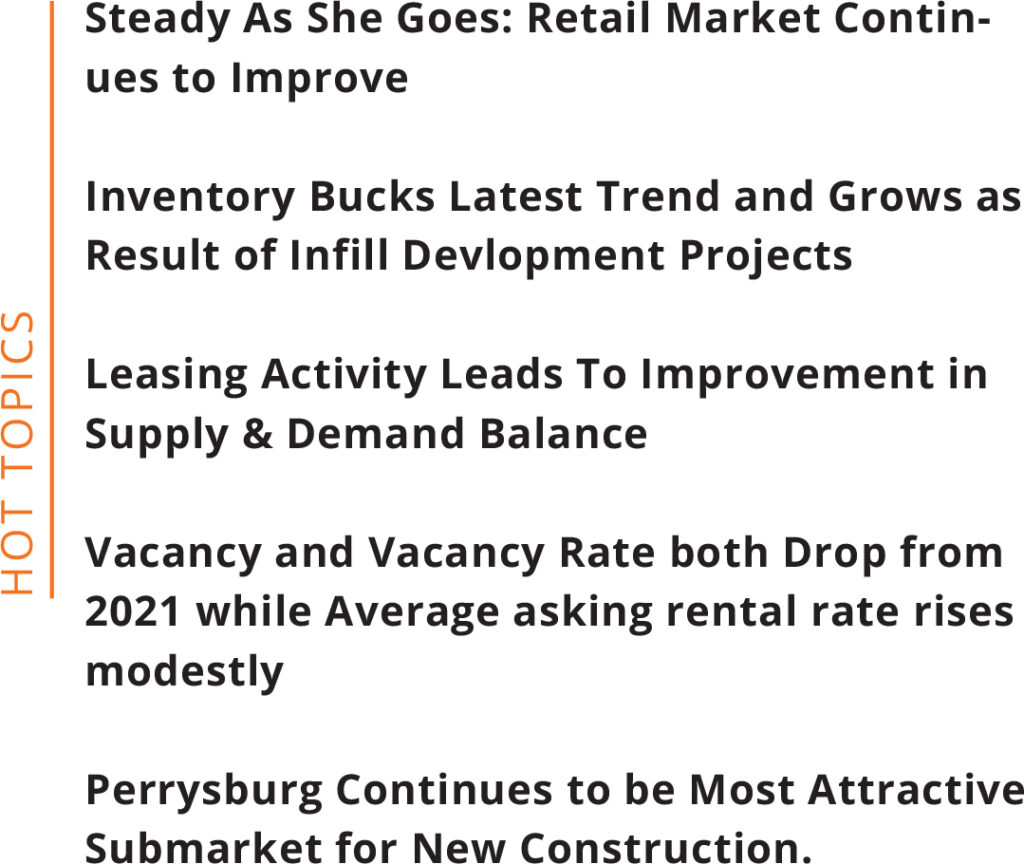 The Toledo, Ohio retail space market performed very well in 2022 according to the Reichle Klein Group year end survey. Steady is the word to describe the market. Steady user interest, steady deal flow and steady im- provement among all the key metrics.

Over the last several years we have been reporting how the Toledo retail space market has been healing itself from significant oversupply and obsolescence of space through redevelopment and repurposing of retail sites. As this process was unfolding the total square footage in the inventory steadily shrank. The accompanying declines in the overall market vacan- cy rate were largely driven by the volume of margin- al space going away rather than new tenants filling space. As evidenced by the demolition of the former Sear’s store at Westgate occurring as this report is

At year end, 2,761,000 square feet of space was under construc- tion within the geography tracked in this report, down from 3.2 million at mid-year. Most all the space under construction was built-to-suit space. However, there were three speculative proj- ects underway, one in north Toledo, one in Oregon and one in northern Wood County. Additionally, there was another 1 million square feet of space under construction in outlying counties of northwest Ohio, much of which was speculative.

As has been widely reported elsewhere, Peloton suffered major financial difficulties in 2022 which, among other things, led it to cancel plans to occupy a facility then under construction in Troy Township in northern Wood County. The 1.2 million square foot building was delivered unoccupied and placed on the market for sale. Still the market was able to reach 3.5 million square feet of absorption in 2022. But, due to the Peloton situation, the overall market vacancy rate did increase to 3.78% at yearend 2022 from the historic low of 2.86% reached at mid-year. Were it not for the Peloton vacancy, the rate would have fallen yet again.

The average asking rental rate for the overall market increased dramatically in 2022 and stands at $4.58 per square foot, an $.81 increase in the second half of the year. Influenced by the spec space now being offered for lease, the average asking rate for Class A space reached $6.85 at year end 2022. Rental rate in- creases had been lagging the tightening and overall strengthen- ing of the regional industrial space market for the past several years. They seem finally to have responded to the rules of supply and demand. Though users may not like it, the increasing rates

A total of 58,859 square feet of newly constructed space was delivered in 2022. At year end, a total of 61.464 square feet of space was under construction in five different developments. Perrysburg continues to be the most active submarket for new construction. Looking ahead, we have identified a further nine pro- posed development projects that would bring nearly 200,000 additional square feet of new space to the market. This square footage does not include new space that might result from the redevelopment of the former Sear’s and Elder Beerman sites at Westgate. Fi- nal plans for those adjacent sites are still forming, but they will almost certainly include a retail component.