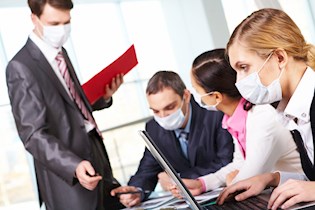 There’s little doubt that living under a year of a global pandemic has caused many of us to adopt new routines and trends.

But how many of those changes will remain after the coronavirus is finally under control?

“This year has forced us to do things differently and the more we do them will mean whether they become permanent,” said Rebecca Ryan, an economist and futurist based in Madison, Wis.

Ms. Ryan, who is head of Next Generation Consulting Inc., plans to conduct a think tank next month to study changes brought about by the pandemic and to consider whether they have permanence.

One obvious area of concern is office space.

The pandemic has caused many businesses to rethink how much office space they actually need by allowing large sections of their work force to work remotely from home.

“Number one, yes, many businesses have realized there are high costs to run things from Class A office space. And many now realize that business travel is expensive,” Ms. Ryan said. “Those are two things we have to be mindful of.”

However, a dichotomy is emerging, she added.

“Some still believe that good things happen best when people are together in the same area,” Ms. Ryan said. “While some have figured how to collaborate visually online.”

Until now, most companies have not displayed the discipline needed to create sound virtual synergy through online services like Zoom, she said.

“There are now two camps — those who value collaboration and don’t want to learn how to do it at a distance, and those that do. There is a higher cost involved in doing it at a distance, but those companies who are going virtual feel it’s worth it,” Ms. Ryan said.

Whether that leads to lower demand for office space is yet to be determined, she added.

A recent Office Space report by the Reichle Klein Group, of Toledo, suggests some companies in Toledo will downsize their office space soon as a result of the pandemic and having more employees work remotely.

In the report company CEO Harlan Reichle, states “…we are now learning of COVID-related vacancy looming as sublease offerings are being readied to be taken to market. Some of these are quite large blocks of space. The typical scenario entails an operation shifted to remote work during the spring-2020 lockdowns and then a decision being made along the way that the space would not ever be reoccupied. At end year 2020, many companies continue to keep their work forces working remotely.”

Mr. Reichle added that with “…vaccines now approved and being administered at an accelerating rate, there is the sense that perhaps the end of the pandemic is in sight. Optimistically, one can hope that perhaps some of these decisions to never reoccupy offices and to put them on the market for sublease will be reversed. Further, one can hope that more such spaces will not eventually be brought to the market.”

Last May, Twitter CEO Jack Dorsey announced that many of the social media company’s employees would be allowed to work from home in perpetuity, even after the coronavirus pandemic ends.

“We were uniquely positioned to respond quickly and allow folks to work from home given our emphasis on decentralization and supporting a distributed work force capable of working from anywhere,” a Twitter spokesman said.

Ms. Ryan said remote work from anywhere is another change accelerated by the pandemic that is likely permanent.

But she added that the widening of geographic boundaries for employees complicates other issues, like worker compensation.

“What is this going to do to salaries, because a San Francisco salary is very different from a Toledo salary yet you could have workers in both places. The Toledo worker can live like a king with a San Francisco salary,” Ms. Ryan said. “So will we see salaries become far more liquid and fixed to where an employee lives?”

The pandemic has wrecked much of the restaurant industry, with restaurants shut down for several months — they are still closed in Michigan — and then limited to half-capacity in Ohio since July.

But that industry has evolved and adapted during the pandemic and many of those adaptations likely will remain well after the virus is under control.

Others have expanded their carryout, delivery, and curbside services. Most have added online ordering.

And in a swift decision in October, Ohio amended its liquor laws to allow a restaurant with a liquor license to sell up to 3 to-go cocktails for off-premises consumption as long as they’re ordered with an entrée and are in a sealed, closed container.

“Alcohol takeout, that was a huge gift to the restaurant industry because that’s where they make their money,” Ms. Ryan said. “…The state of Ohio threw them that huge bone to keep them on life support until they can fully open up again.”

But the futurist added that outdoor dining, which is popular in the West and East but has never gained much headway in the Midwest, is becoming a potentially sustainable trend in the Great Lakes region.

“Alfresco dining, it’s not just that people just want to eat outside, but it also gives the community a sense that something’s going on. With outdoor dining you get a sense of vibrancy,” Ms. Ryan said. “That’s been a quality of life factor that’s been going on elsewhere but not so much in the Midwest.”

Prakash Karamchandani, co-owner of the Toledo-based Balance Pan-Asian Grille restaurant chain, agrees that outdoor dining was a trend before the pandemic, but is growing in the Midwest and even more so during the pandemic.

“I see more and more people who are going to continue to take advantage of that,” Mr. Karamchandani said. “I don’t know if takeout alcohol will be a long-term thing. It will probably be the most likely thing to reverse course as time goes on, but I do think takeout and the enjoyment of takeout meals will be with us afterward.”

Since the pandemic, Balance Grille has gone strictly to takeout meals, including curbside service.

“A few years ago we were 60 percent dine in, 40 percent takeout. Now it has switched course. We were at 80 percent takeout right before the pandemic,” Mr. Karamchandani said. “People are busy, they’re working from home and working all the time. …For us, curbside is a permanent addition to our business model. We’re working with our landlord now to see about adding permanent curbside parking space.”

Others have recognized a changing business model too.

The company leased a 1,260-square-foot space in a strip center at 5380 Monroe St. where it is building its new takeout and delivery concept.

In announcing the new store, Mark Wallace, who oversees operations for Ralphie’s, said, “Prior to the pandemic, demand for off-premise dining both carryout and delivery was growing. It has only accelerated in 2020.”

Sam Zyndorf, a retail specialist at the Toledo office of commercial real estate firm Signature Associates, said a local franchisee of Tim Horton’s restaurants is also making changes due to the pandemic.

The Tim Horton’s at 6815 W. Central Ave. in Sylvania Township was torn down this year and a smaller replacement restaurant is nearly complete.

The replacement will have very limited seating and a drive-through window. Mr. Zyndorf said it’s been rebuilt to have come in, get food, and leave.

“It’s a third of its former size. …It can’t be more than 1,000 square feet,” Mr. Zyndorf said, adding that the franchisee told him his business has never been better.

Mr. Zyndorf agrees that office space will be reduced with more people working remotely and fewer in the office.

“I really think it’s going to be a hybrid of what we had. The world after the virus will be different. Does that mean we’re going back to the way it was? No,” he said.

“Some people will never go back to the office. Does that mean you’ll need less space? It does and it doesn’t,” he said. “You will require less space because you’re not going to have more people there, but you’ll need more space per person than you used to have. There’s not going to be a cubicle every few feet.”

“Retail was changing anyway. This just put it into overdrive. I’m an old guy and even I’ve bought stuff on the Internet,” he said. “Plus you go to the mall, you see more and more stores are closed. And I don’t know how these movie theaters are going to survive with streaming becoming more popular. … They can’t do the volume to justify the rents.”

Mr. Karamchandani said he feels strongly that wearing masks will become a permanent change for American society, despite reluctance on the part of some.

“I think masks are one of those things that could be permanent. If you see what’s happened in Asia, people there get sick and they’re more aware of their situation and the community. They start wearing masks all the time,” he said.

He added that he also hopes employers will become more lenient with regard to sick time.

“In some ways, there was this whole bravado thing, you come in and work even when you’re sick because you’re expected to work through it. I hope that’s chopped right in the head and never comes back,” he said. “Unfortunately, a lot of places are still like that even in the middle of a pandemic.”

Another change that Mr. Karamchandani has noticed that he hopes is permanent, is greater respect for frontline health-care workers and other workers like restaurant staff, grocery workers, gas station attendants, fast-food workers, and those who generally had been taken for granted but whom the pandemic has revealed are essential.

“I think it’s great that we are recognizing hospital workers as frontline workers along with supporting the police.

“The people working through the pandemic, it’s made us rethink what an essential worker is,” Mr. Karamchandani said. “I think it’s opened a lot of people’s eyes.

“Early on in the pandemic, we suddenly gained an appreciation for people like those who work at the gas station. Because when it comes right down to it, If you don’t have gas, nobody’s working,” he said.

Ms. Ryan said the appreciation for the low-wage employee who has stayed on the job through the pandemic has made it easier to argue in favor of boosting the minimum wage.

“What a great gust in the sails for increasing the minimum wage that would be. Essential workers all benefit from that,” she said.

Getting the Job Done

“Erik Lassiter - our assigned manger from RKG - is proficient, ever ready and available. The million-dollar retrofit he managed for us in Findlay, Ohio was carried out in a timely manner with impeccable quality.”
Amy Clark
Roach Enterprise of Ohio LLC
Contact Us